Why am I doing this?

When I was in high school my studies were heavily skewed towards foreign languages and literature in general. This means that between ages 14 and 18 I wrote a whole lot of literary analysis essays. The idea behind this exercise is that if you analyze and describe the techniques that make a piece of literature effective, you’re more likely to understand how and why that piece has been written.

Some 10 years later I became interested in Natural Language Processing (NLP). What I found most fascinating is the idea of machines understanding human languages, a task that humans often fail at. As a result, I spent most of my time at the Recurse Center teaching myself about NLP and playing with Shakespeare’s body of work in the attempt to automate the process of writing a literary analysis essay.

This article is a summary of what I learned and the method I came up with.

What is natural language processing?

In a broad sense, NLP includes all computer manipulations of human languages, from simple word counts to understanding human utterances. By enabling computers to understand as well as generate natural, human language, they can be used for a wide range of everyday applications, like machine translation and spam filtering.

Some of these methods can easily be applied to literary texts to extract structure and meaning.

The first step in the analysis of a piece of literature is identifying what category it belongs to. This task is essentialy Document Classification, the process of assigning one or more labels to a document. This is generally a supervised problem, where labels are predifined and assigned to the input documents prior to training the model. 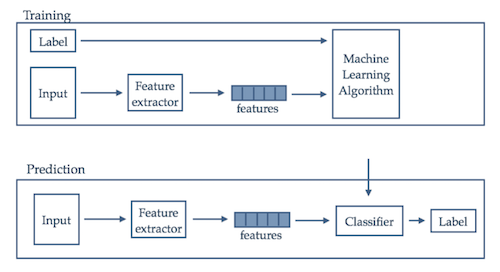 The two stages of supervised document classification: During training, each document is passed through a feature extractor and labelled before being processed by the training algorithm. The input pairs are then used to define a function (classifier) from the feature space to the labels space. In prediction phase, the classifier takes features extracted from a new, unlabelled document and uses them to return an appropriate label.

The issue with this approach is that it requires a large collection of labelled documents to train the prediction model. When a labeled set is not available someone has to manually tag the documents in the corpus prior to the training stage. This can be time consuming.

The alternative is an unsupervised approach. Groups are created with the goal of capturing, or extracting, the natural structure in the data. When this is done correctly it is possible to inspect only a subset of each group and attach a label to each of them.

Shakespeare is best known for his plays, most of which were produced between the end of the 16th century and the beginning of the 17th century. There is some controversy regarding whether all the plays were written by the same author, but scholars generally agree on dividing them into three categories: comedies, tragedies, and histories. I’m going to leave the histories out of the analysis because they’re much harder to define, and focus on the differences between the other two categories, comedies and tragedies.

Comedies tend to focus on situations rather than characters. Multiple plot lines that see characters separated and reunited, use of puns, identity confusion, family conflicts, and young love are all common traits of Shakespeare’s comedies.

Tragedies focus on characters over plot and emphasize their honesty or lack thereof. The plot is generally more linear and follows a classic definition of tragedy in which a hero of noble birth is brought to ruin by some tragic flaw.

Shakespeare wrote 17 comedies and 10 tragedies for a total of 27 plays and a vocabulary (excluding stop words1) of over 11,000 words (the features). This influences the analysis in two ways:

Feature extraction is a general term for methods that convert raw data into a set of derived values, called features, intended to be non-redundant and informative. When the initial set of inputs is too large or redundant, feature extraction facilitates learning by feeding the classification algorithm with a reduced representation of the data containing the information relevant to the task, rather than the initial complete set. This is very domain specific and depends on the available data.

In the example, it’s important to extract the semantic information in the text so that it can easily be interpreted by a machine. A simple way of doing this is using tf-idf, a statistical score for the importance of words in both the document and the corpus. Tf-idf, however, doesn’t reduce the number of features. For that, we’ll use topic modeling. Topic modeling allows us to extract features that describe the content of the corresponding document, representing it in the form of word distributions, revealing hidden semantic structures in the text.

Latent Dirichlet Allocation is a topic modeling technique that describes the probabilistic procedure used to assign words to documents.

The process that describes documents generation has 3 steps.

What is most interesting about LDA is the use of the Dirichlet distribution, which is particularly useful for modeling the randomness of probability mass functions (pmf). A pmf gives the probability of a discrete random variable to take a specific value. A simple example is a 6-sided die, where in order to select a random value we roll the die and produce a number from 1 to 6. In theory, each number has the same probability of being selected, but in real life, due to the laws of physics and manufacturing, each die is slightly different and represents a different pmf. If we have a bag full of dice and we randomly extract one of them we are effectively drawing from a random pmf. This can be modeled with a Dirichlet of parameter α.

In the context of text analysis, a document is a pmf of length V (the number of words in the dictionary) and a collection of documents produces a collection of pmfs. In LDA topics are latent multinomials so we can use the Dirichlet distribution to describe the probability of each topic in each document. Ultimately, this means that LDA can be used to extract topics in form of words distributions and then represent each document as a mixture of topics2.

Running LDA on the collection of plays attributed to Shakespeare, we obtain the probability distribution of the words in the dictionary for each topic. By looking at the words that have highest probability in the topic it is possible to assign a label to each of them. 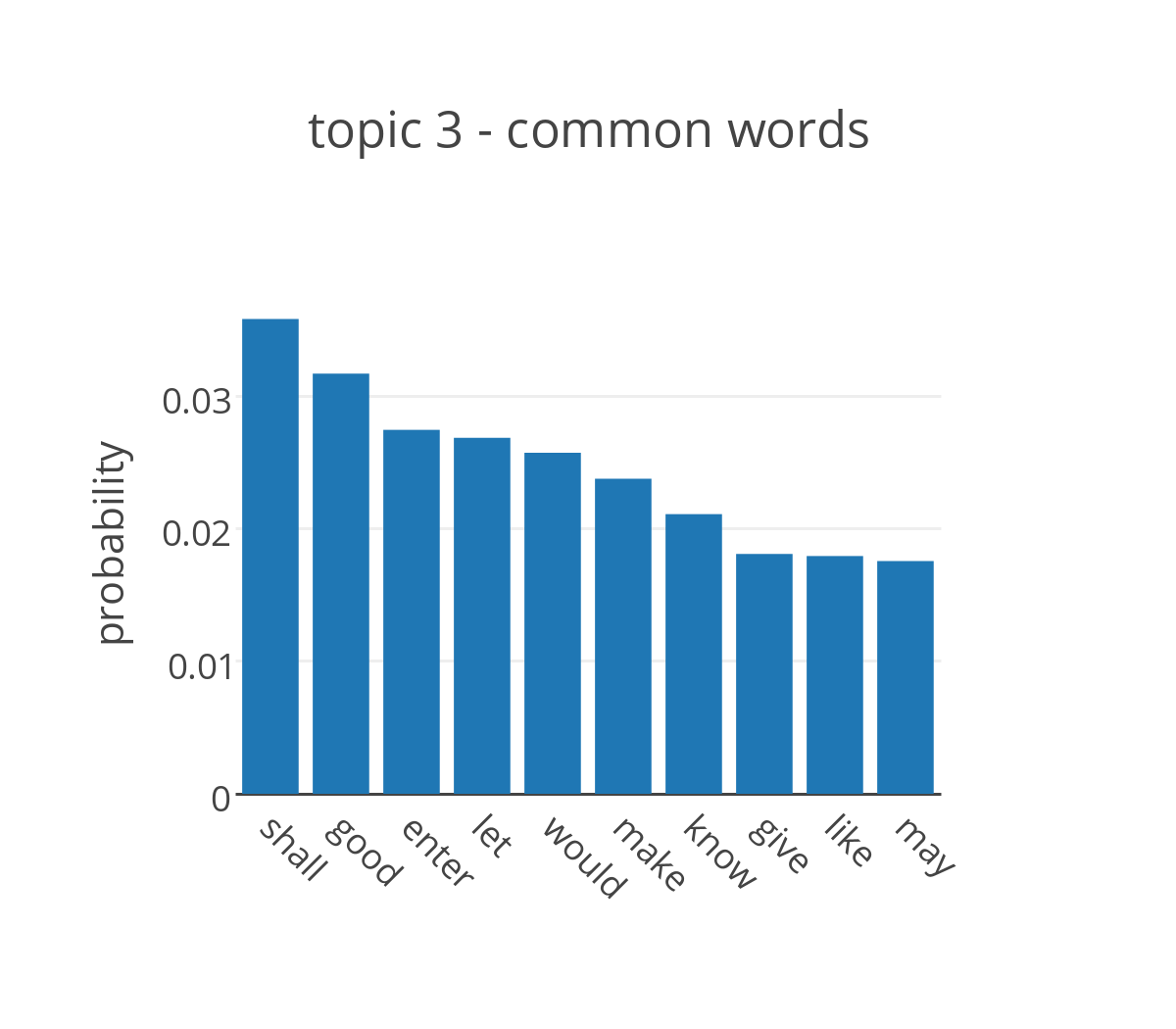 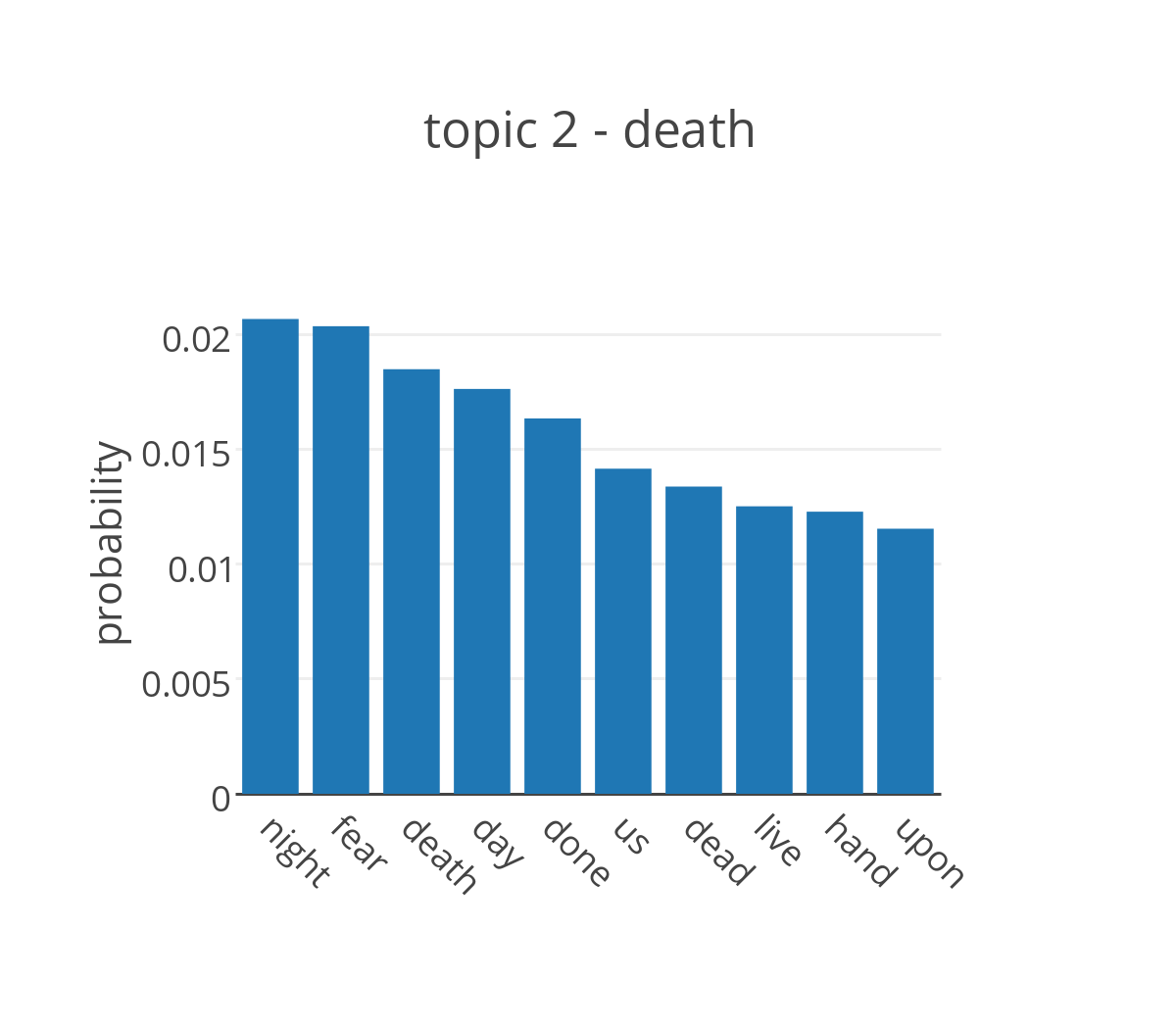 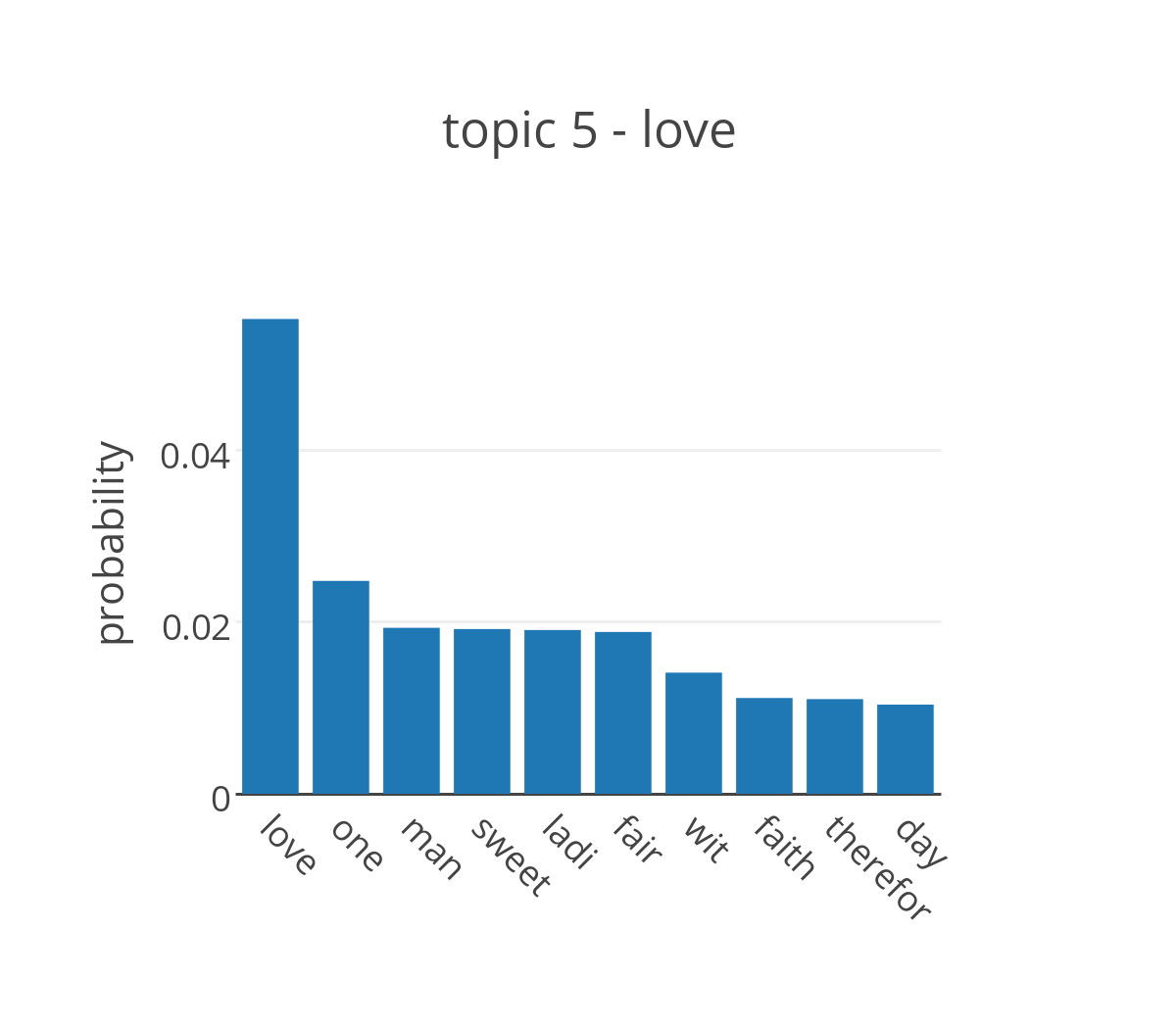 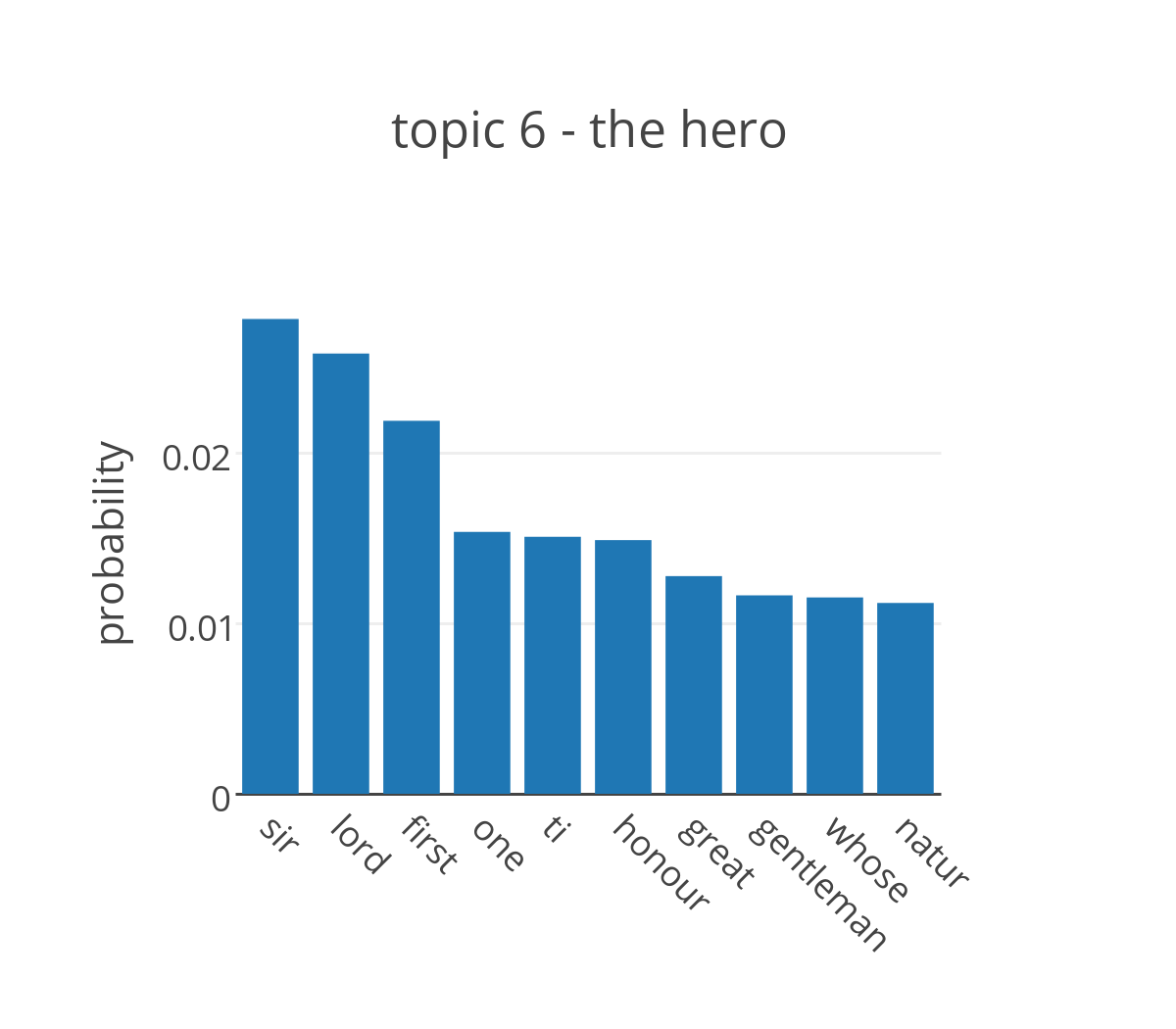 The figure shows the probabilities for the top ten words in four of the topics extracted from the plays. The most likely words to appear in topic 2 are terms that are commonly used in a conversation without adding too much meaning to it, but are generally not included in the list of stop words. It’s not ideal, but it makes sense that they cluster together into a single topic. The top distributions of topics 2, 5, and 6 are more promising and can be easily associated with three of the main themes in Shakespeare’s plays, respectively death, love and the hero.

The other output of LDA is the distribution of topics in the documents. 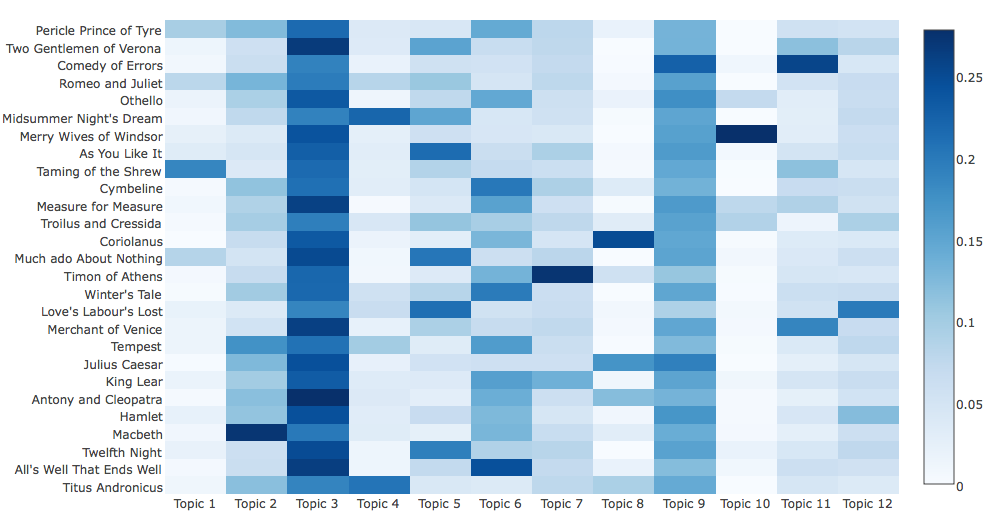 Plays as mixtures of topics. Topics 3 and 9, which assign higher probabilities to words frequently used in conversation, have relatively high probabilities of appearing across all plays. Other topics present more variance across the set and are represented with darker colors, matching plays that are more likely to touch specific themes. For example, topic 5, related to love, has a higher probability/darker blue box for Midsummer Night's Dream and lower probability/light blue box for Macbeth.

In the figure above, topics are on the x-axis and each line represents a document. Boxes are colored according to the probability of topics in each play: darker blues indicate higher probability of appearing in a specific document and lighter colors indicate lower probabilities. Unsurprisingly, the boxes in the columns of the topics associated with common words (3 and 9) are consistently darker. Since the clustering algorithm aims for a partition that maximizes the differences between groups, these topics will not be very useful in grouping the plays. However, there is enough variability to pass these representations of the documents as input to a clustering algorithm for the grouping.

K-Means is a simple unsupervised algorithm for solving clustering problems. The goal is to create a partition of n elements into k groups so that each element is assigned to the cluster with the nearest mean. Given an initial set of k means the algorithm assigns each observation to the nearest cluster in terms of Euclidean distance, then recalculates new means to be the averages of the observations in each cluster and reiterates until the assignment no longer changes. At the end of the procedure, elements in the same group are more similar to each other than to elements in different groups.

The topics’ probabilities are the features used as inputs of K-Means. The result is a vector of labels that divides the plays in two groups. In the table, tragedies are highlighted in bold.

The first group is entirely composed by comedies, except for Romeo and Juliet, while the second group is evenly split between the two categories. This is not a great result. In order to understand the grouping, it is useful to look at the average distributions of the groups. As expected, these show that when a topic is more likely to appear in a group of documents, its probability is lower in the other.

Content doesn’t seem enough to explain the differences between comedies and tragedies, but it can explain the evolution of Shakespeare’s personal writing style.

When looking at the distribution of the year the plays were first performed the two groups show some overlap around 1600, but it seems clear that the plays in one group were staged significantly earlier than the others. 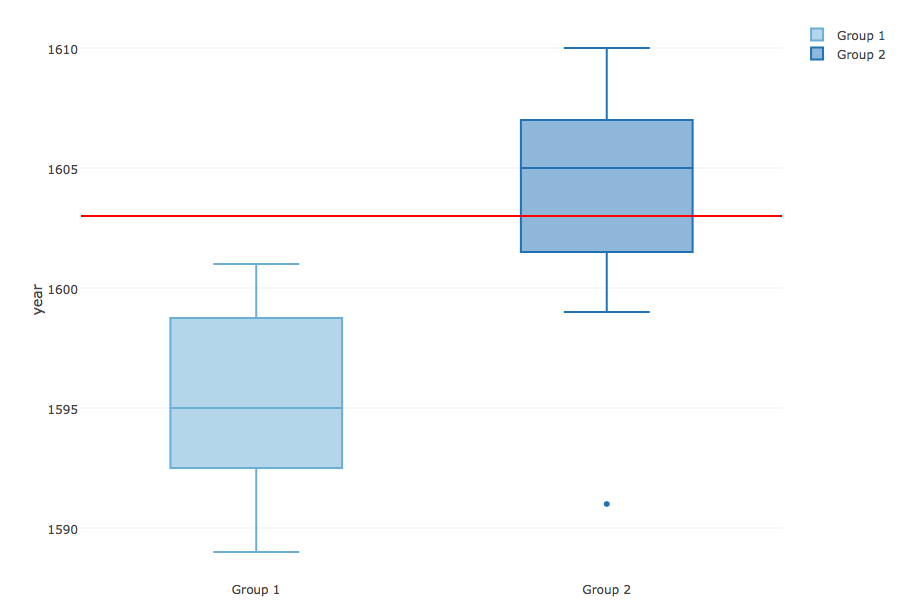 Box plot of the year each play was first staged by group. The box represents the central 50% of the distribution, with the lower, middle and top lines representing respectively the minimum, the median and the maximum of the distribution exluding outliers (single dots). Only one of the plays in group 2 was staged before 1599, while all plays in group 1 were staged before 1601.

At the time of this analysis I had no idea what this could possibly mean, but the internet is a magical place and has a good explanation for this. The traditional classification of comedies, tragedies, and histories follows the categories of the First Folio, the first complete collection of Shakespeare’s works, published in 1623. Modern critics don’t necessarily agree with it and have introduced different terms and categories. One of the categorizations follows the evolution of Shakespeare’s style over time, identifying an Elizabethan Shakespeare, who is younger and more influenced by the classics, as opposed to a Jacobean one, more mature and writing for a different king. It is not possible to pinpoint exactly when the change happens, but scholars indicate the end of Queen Elizabeth’s reign (1603) and first years of the reign of King James as the time he reaches his maturity, shifting not just the subject of his work but also his style.

All the analysis is done in Python using the Natural Language Toolkit for text manipulation and scikit-learn and lda packages for the modeling. If you’re interested in the code, there is a repo here: it includes all the inputs, papers and a not-so-messy notebook with all the code used for this article.

Serena is a data scientist and a nomad, currently transitioning between the Netherlands and the UK. She enjoys using math and code to solve real world problems and is obsessed with data, food and travels, not always in this order. She attended the Spring 1, 2015 batch of the Recurse Center.
Editors:
tweet this post
Next: A tour of random forests